I'm reviving this blog as a place to store the record of my making a 1855-ish dress, as part of my research into 1850's clothing.

For those who don't know, I work part time at the Arabia Steamboat Museum in Kansas City. I am mostly engaged in documenting and restoring/reconstructing clothing artifacts that were recovered in the winter of 1988-89 and preserved in the early 1990s. We have almost no women's wear in the collection, although museum lore is that there were several crates of women's ready-made cotton dresses, which did not survive 130+ years in the groundwater of eastern Kansas. We have only the buttons left... so many buttons.

So while discussing the likely design of those dresses and whether we might reconstruct one for a display example, someone asked me how long it would take to make one. Now, the dress itself is not a huge problem. I could do that in two days, assuming I had a pattern. But this is an era I have not spent much time in. I never cared for the hoopskirts look so I don't have a collection of patterns or a depth of knowledge about construction methods. A lot changed between 1850 and 1880 where I usually hang out.

Besides, a whole new Victorian outfit involves not just the dress but the undergarments. The cage crinoline or hoopskirt was "invented" which is to say, patented and mass-produced, in late 1856. But the dresses on the Arabia and the ladies on the frontier would have relied on corded petticoats or crinolines (loose-woven, stiff horsehair petticoats). I don't have those either and I don't have a lot of knowledge about how they were made.

Through one thing and another, I have decided to make an 1855 dress, to test the techniques and also to have something to wear for museum events. I intend to make a corded petticoat, a flounced and/or horsehair petticoat, the skirt, and the bodice. I already have a corset, chemise, and drawers that will work for that era so I’ll just use those; I already know it takes me 12-16 hours to make a corset and about 8-10 for the other two items. (Seriously, for some reason a dumb chemise takes a million years to finish.) 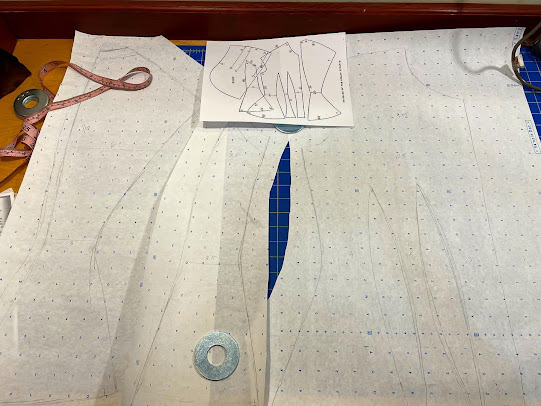 Because I’m doing this largely as a learning exercise for my work at the Arabia Museum, I will be documenting this process much more thoroughly than usual. I intend to do the work on my 1918 treadle machine and by hand. Call it experimental archeology.

I drew out the pattern for the bodice on Tuesday, just to get a feel for the proportions and fabric requirements, but the bodice will actually be the last thing I make, because it has to fit over the skirt and petticoats.

I must report, however, that I've used a dozen or so historical patterns from magazines like Godey's, which are always single-sized "for a medium-sized lady" and usually only give the vertical measurements, and I've never once had to make one longer in the torso. I'm 5'6", which is two inches above average for a 21st century woman, so I definitely look askance at the claim that people in the 19th century were "so much smaller" than we are now.