getting around in 19th century St. Louis

"I'm a St Louisan myself, so I know that Hyde Park is a good long distance from Carondelet. These days, it would take two hours to walk it, and I bet it would have been at least double that in those days. Did your characters ride, take the horse drawn omnibus or streetcar, or what?"


This is one of those things I like to think about, and one of the unexpectedly frustrating bits of research I had to do for the book—calculating travel times. How far was it between these places I was writing about, and how did people get there? Figuring this out actually affected the story-timeline in parts of CURSE.

I was able to find a good map of St. Louis published in 1879, but sadly for me it had no scale on it to indicate distance. Then I hit upon the bright idea of using Google Maps.

According to the Almighty Google, it's about 10 miles from Hyde Park to Carondelet Park in modern-day St. Louis. Those two points, by the way, were roughly the far northern and far southern points of the incorporated city in 1880. That's right, the whole of St. Louis was only about 10 miles top to bottom, and about 350,000 people, according to census records. 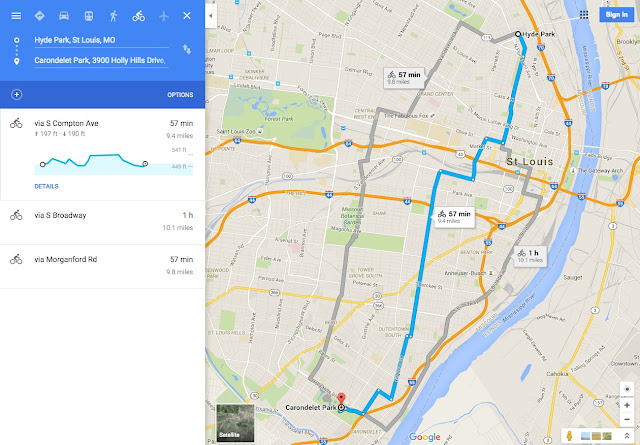 According to Google, in 2016 it would take a person about three hours to walk that distance. I'm not sure why my reader assumed it would take LONGER "in the old days" (on the assumption that everything moved more slowly back then?), but I figure a little over two hours for a tall, fit man like Trace to walk that distance, assuming he was carrying nothing, and figuring there were fewer obstacles—traffic, stoplights, construction detours, etc.— in 1880. (It takes me about 30 minutes to walk 2 miles to my favorite coffee shop, over flat ground, carrying a backpack, and I walk fast for a girl, but not near as fast as, say, a 6'2" army ranger or firefighter who runs every day.)


If Trace was in a hurry, he'd take his horse. In fact at the beginning of the second story, "Printer's Devil," he and Boz are riding their horses south to Carondelet to work for the day. Later, I mention several times about Trace riding Blackjack to Miss Fairweather's house, because it would be a good deal further north than the working-class neighborhoods and businesses where he'd spend most of his time, and he's usually in a hurry to visit her. I figure a horse and a modern bicycle could be calculated at the same average speed—between 10 and 25 miles per hour at a non-racing speed, depending on traffic and terrain. Google maps says it would take about an hour for a bicyclist to get from Hyde Park to Carondelet, so figure an hour, max, for Trace to ride to Miss Fairweather's house from anywhere in the city.

There were horse-drawn street cars, but much like modern bus lines, they probably were slower than horseback, because of meandering routes and frequent stops. Also, they cost money to ride, and a man whose livelihood depended on a working horse would want to get him out for daily exercise, to keep them both fit.

So there you go—a taste of what historical writers think about.

Here's the Google Maps link, if you want to play with the numbers yourself.

top 5 ways to die in a mine shaft

I'm finally doing some much-needed research into mining towns and mining techniques of the 19th century for to finish the end of my Boz and Lily story. I knew mining was dangerous but Holy Hera. Here are some of the leading contenders, in no particular order:

So Neil Gaiman said something about Clarion and a whole lot of people got uptight about it and I'm like, I dunno, man. I maybe wanted to go to Clarion for like, a nanosecond, circa 2001 when I first heard about it? But I was still young enough to remember how badly I'd wanted to take creative writing in the 10th grade (and later, sophomore year of college) and how disillusioned I was, both times. I've never trusted what teachers wanted me to do (deep seated resentment of authority) and I've never much trusted the opinions of my so-called peers (I've always been ahead of the curve). I kinda have always had this standard in my head of what I wanted to do, and I basically use beta-reader feedback to gauge how close I am to achieving that standard. I never expected any of them to teach me how to write. I am a lousy tai chi student but even I understand writing and martial arts are two things you have to figure out for yourself. Still no one gets anywhere without a teacher and I've had plenty, though what I learnt from them was not necessarily what they were trying to teach me. There are many many paths to Rome, as they say; I knew from the time I was 12 that I was a writer and I devoted an absurd amount of time, energy, and money toward that purpose. You might even say I've made sacrifices: no kids, menial career path, borderline useless undergrad degree. I'd already written my first million words by the time I was 26 or so; when I counted it up I realized, Yes, that year was the first manuscript in which I sort of knew what I was doing and worked from a plan. Even so it took me two more novels to get one I thought was sellable, and it was. If you're starting on this writing journey in your 30's or 40's or after you've gotten a degree in accounting or whatever, then yeah--you're going to need a fast track to learn all the stuff I hacked out through classes and reading and independent study since I was 12. And if you've got that accounting degree then you probably have the money to afford Clarion. More power to you. But don't delude yourself you're getting anything special; you're just getting the Cliff's Notes version of what other writers learn over 28 years and 2 million words. I talked to a class of high-schoolers last month and almost the first thing their teacher asked me was whether I had an MFA. Of course *she* was about to start on her MFA. I've noticed that adults tend not to give themselves permission to pursue learning for the sake of learning; they only put in the time/money/effort if it will pad their resumes somehow. That's the downside of this reward-based society we operate in. Just realize that the workshop or the MFA or whatever won't make you a writer and it won't get you published. You still have to put in the hours and you still have to hit on the lucky magic combination of story/character/style/zeitgeist. That doesn't mean it's time wasted. Clarion is juried--as are most MFA programs--so you probably have some chops even going in. One might argue you'd be better served locking yourself in a hotel room for six weeks and just writing your little brains out instead of wasting time reviewing other peoples' stuff, but I can't say that with a straight face because I've been going to the same writer's group for 15 years and just when I think I'm not getting anything from it, a new member comes along or an old member brings a new story and the sheer challenge of dissection (does it work or not?) gets the creative machinery grinding again. Writers work in a vacuum most of the time and we need that answering ping; if you go to one of these things and meet your ideal critting partner or a couple of friends who become lifelong pen pals (I have one of those left over from Critters whom I met 13 years ago) then you got something out of the experience and I certainly got something from Critters; some early words of encouragement on Trace (Sikeston) and my friend Joy's absolute willingness to tear a story apart and put it back together in a different structure. Like my tai chi teacher says, Just learn one thing. No experience is ever wasted. But no one experience makes up the whole, either.
Posted by Holly at 9:08 PM No comments:

now this is high praise

I stumbled across a random review of Curse over the weekend. I was amused first by the reviewer comparing me to Tarantino:


This is Tarantino on steroids. The action and gratuitous killings and deaths we have grown to love and hate in a Tarantino film is what our Ms. Messinger provides in print. She provides different scenarios in the novel as Quentin provides chapters in his movies. I hope he picks up this novel cause he is the only one to do it as a movie.

Can't find fault with that, considering my own love/hate relationship with QT's movies.

But then I looked back at the blogger's previous reviews. His last three reviews were Toni Morrison's God Save the Child, Harper Lee's Go Set a Watchman, and Umberto Eco's Numero Zero. (I didn't even know Eco was still alive!). And then my book. That's some pretty exalted reading habits. Not a bad endorsement. So thanks, Mr. English teacher.
Posted by Holly at 10:34 AM No comments: