Gratuitous steampunk-western by Mike Resnick, who happened to be one of the editors at Baen's Universe when they bought "End of the Line."

ETA 11/11/10: Seems the reviewers at Publisher's Weekly agreed with my initial assessment:


From Publishers Weekly
In this lusterless steampunk western, Wyatt Earp and Doc Holliday are outfitted with superhard brass body armor and Gatling-style handguns; Thomas Edison is a cyborg working with Ned Buntline on motorized stagecoaches and other wonders; lawman Bat Masterson has vampiric tendencies; gunslinger Johnny Ringo is a zombie bent on besting Holliday in a gunfight; and Geronimo is a successful shaman and general making sure the United States stops at the Mississippi. Five-time Hugo winner Resnick brings a sparse, dialogue-centric writing style to the classic story of the gunfight at the O.K. Corral, twisting it ever so slightly to blend magic and mechanism into its narrative weave. The larger story of the feud is untouched, making Resnick's rendition feel like a copycat of Tombstone with gears glued on. (Dec.)

This is a test drive of the costume I made for a client. I tried it on me, because she and I are the same height and vertical proportions (I'm a couple sizes smaller, though, so this is pinned at the back). Also I like to make sure I get pictures before I release my creations into the wild. 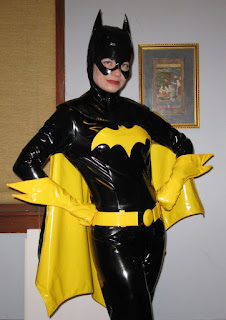 All PVC except for the mask, which is leather. All my own patterns. Strongly based off the Bruce Timm illustrations. I ought to Photoshop some red hair in there.
Posted by Holly at 8:55 AM 2 comments:

Seriously. You know the trend is dead when Halloween Express has a line of Steampunk-themed costumes and accessories.

This has got to be my favorite. 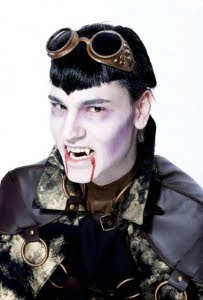 Let's see... You're Steampunk Spock dressed as Dracula at a goth rave! Right?

I know it's not any more ridiculous that the generic-Goth wigs they sell in those places, or all the slut-bunny costumes that get pushed on women. But it kind of highlights the problem with "Steampunk" as a subculture, namely: you can't extrapolate from steam-age technology or aesthetics if you don't start there in the first place. (We won't even talk about Victorian ethics!)

Frankly, a pair of Steampunk goggles mass-produced in plastic may be the definition of irony. If you want a pair of goggles, go buy a repurposed vintage pair from some artist on Etsy.

Better yet, hit the antique malls and make 'em yourself.
Posted by Holly at 3:05 PM 5 comments: 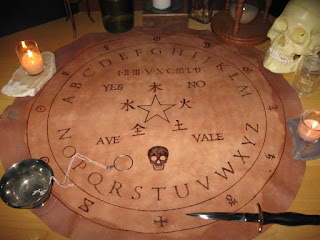 "You asked once whether I had your psychic abilities," Miss Fairweather said. "You stopped short of asking how, in lieu of them, I communicate with the spirits. I am going to show you one method."

She picked up a feather, as black as the rest of the bird, and dipped it into a small silver bowl of oil. With it she drew a circle around the cage. Then she took a piece of crumbly yellow chalk and drew a few symbols at four compass points outside the glistening circle. At last she lit the feather in the candle. A horrid smell filled the air. She quickly blew across the smoldering feather, directing the smoke toward the bird in the cage.

It hopped up and down on its perch a few times, then began to bow rapidly and caw, with strangled urgency. Abruptly it dropped a load of birdshit onto the floor of the cage and fell like it had been shot.

"Be quiet," she murmured. "Have you not seen this done before?"

"Not with a bird. I saw a hoodoo woman put a charm on a pig, once, and send it to find a murderer." The raven lay twitching on the spirit board, its eyes rolling.

"Did it work?" Miss Fairweather asked.

"The voudouenne said it did. I hope the pig was right, because they hanged the man it ran to."

The raven abruptly rattled its feathers and hopped to its feet. It bowed to them twice, tapping its beak on the floor. It cocked its head, waiting for acknowledgement, then tapped twice more.

"Be welcome," Miss Fairweather said to it, and a chill ran through Trace. The bird’s eyes were brighter than they had been a moment ago, he would swear to it, and the light in them was not the gold of candlelight, but the cold silver of spirit-light. "Name yourself," she commanded.

"Crick-et," the bird croaked, and Trace felt the hair on his arms and neck stand up.

Miss Fairweather nodded in satisfaction. "It is always best to make them name themselves," she said to him. "If they will not give you a name, it is probably not an entity you will want to transact with."

"I should think not," Trace said, leaning away from the cage. "That’s a demon."

So I had this itch to make a spirit/talking/ouija board.

No, I do not believe in them or any of the hype attached to them. I don't think I've ever actually played with one. I don't intend to play with this one. I find it equally amusing and appalling that people are so afraid of something that was invented to exploit the enduring hoax that is/was Spiritualism.

I just wanted one because my character had one, and I am that big of a geek.

Also, I think they're pretty.

So I made one. On leather. I did the lettering by hand, with a woodburning pen. And because I was making the kind of board Sabine Fairweather would find useful, in addition to the standard letters I threw in some alchemical symbols and the five Chinese elements (wu xing). The Chinese calligraphy was especially fun to do. 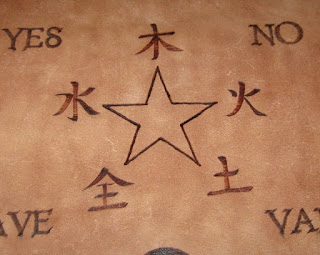 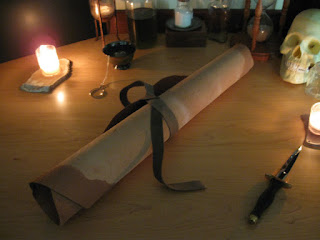 It can be rolled up, for storage. Or travel, if one were so inclined. Miss Fairweather has a tidy mind.

I may hang this on my wall. I need something to put me in the writing mood. Heck, maybe I can use it as a plot generator.
Posted by Holly at 7:25 PM 5 comments: