Those of you who've known me a long time may remember when, lo these many years ago, me and a friend cosplayed Darla and Drusilla in their 1880 garb. (From the Buffy/Angel crossover flashback where Dru and Spike meet.)

That dress was the beginning of my long infatuation with the Natural Form Era (1878-1882) of fashion, and the original reason Curse of Jacob Tracy is set in 1880. Sad but true. Anyway, I outgrew this dress over the past decade-plus, and it being my first Victorian sewing project there were certain construction elements in the bodice I no longer approved of (we won't even talk about the polyester underskirt). Also, it was green.

So last winter I decided to make it over. I trashed the underskirt, took the bodice and overskirt completely apart. They are both cotton velveteen, originally white, which I had dyed green. I soaked them in dye remover to get them back to beige, then overdyed the fabric indigo. It was an interesting exercise because it was only the second time I'd used fiber reactive dyes, but the overall result was very good--it just was a bit lighter and truer blue than I'd hoped for. I was undecided about what to do next, so I threw the disassembled, indigo pieces in a drawer and let them sit for a year.

With the weather cooling off I started thinking about this project again. A couple weeks ago I was home sick and browsing through RenaissanceFabrics.net I came across this lovely crossweave silk taffeta and I knew that was what I wanted to piece out my velveteen with.

I bought two yards to see if it would match. It doesn't. 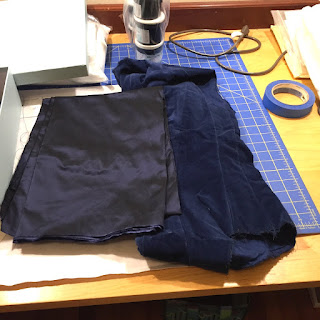 The discrepancy is stronger than I could capture with my camera; the taffeta is a couple clicks toward the purple. But it's much more the color I want, so I ordered a fresh batch of dye from Dharma Trading Co. and I'm going to tint the velveteen yet again. Stay tuned!
Posted by Holly at 1:47 PM No comments:

so about that Indian blood-brother ritual

Today I saw this article pop up in my Facebook feed, reiterating the old chestnut about how American Indians practiced blood-binding, or the exchange of blood between unrelated men (in popular fiction it's usually an American native and a white guy) to make them sworn allies in battle. And while it is not usually my style to argue with people on the internet, I feel this is one of those beliefs that needs to die, along with the idea that vaccines cause autism and the notion that candy corn is food.

Now, caveat: earlier in the year there was a rumor going around that I was claiming to be an expert on "Native American culture" because I had read "five books" on the subject, which is horse shit; in the first place I have read a great many more than five books, and in the second place I am neither an idiot nor an asshole, so I certainly wouldn't claim to be an expert on anything based on a little book-learning.

However, two years ago I did do a fair amount of research on Apsaalooke (Crow) culture in the late 19th century, because I was writing The Romance of Certain Old Bones. Trace and Boz were headed to Montana as hired muscle for an archeological dig, and it stood to reason they would hire a Crow guide, because much of eastern Montana in 1875 was reserved for the Apsaalooke tribes. Ergo I wanted to get a broad idea of how 15-year-old Stanley Many Tongues might respond to the strange goings-on that tend to dog Trace's footsteps.

One of the questions I needed to answer (to my satisfaction at least) was whether the Plains tribes actually did that blood-brothers thing. I wanted Trace and Boz to do it, because reasons, and I had heard differing reports on the factuality of it. I wasn't having Trace and Boz to do it because it was an "Indian thing"—neither of those characters is NA anyway—but Stanley was going to be present and I wanted to know how he would interpret such an act.

If you do just a little bit of reading into the history and anthropology of magic you quickly notice there are a lot of rituals, across many cultures, that treat blood as a sacred fluid. Early peoples recognized blood's importance to life and thus ascribed mystical powers to it; that's why there are taboos against drinking it or playing with it. That's why so many magic rituals—particularly dark or evil magics—utilize it.


By the end of the 19th century microscopes had gotten strong enough that scientists were beginning to be able to discern the parts of blood—red and white cells, platelets—and see how they responded to injury or disease. Mendel's work on heredity was being published in the late 1860's, and Darwin's ideas about evolution had seized the public imagination. Whole new justifications for racism cropped up using twisted interpretations of these theories, which led directly or indirectly to the "one drop" laws of segregation—legal definitions of who was white and who wasn't, who could marry whom, or sell or buy or inherit.

The point is, people understood from antiquity that blood was powerful stuff, and the notion of being related "by blood" was also powerful. The idea of taking a friend's blood into your own body and thus making them a part of you seems to be very widespread. I have seen reports, and I believe there was even a court case in which a couple was accused of miscegenation, where the husband (white) claimed he had injected some of his (black) wife's blood into his own arm, thereby making himself black according to the one-drop rule.

But I have not been able to find accounts of any of the Plains Indians (or any other Native American) tribes using the ritual exchange of blood as part of their adoption or fealty rituals.

Some of the most widely-available books about Crow culture in the late 19th century, by Lowie and Linderman, suggest that the Crow were not averse to spilling their own blood in the name of ritual. Two of the best-documented examples were cutting off fingers as a sign of grief, or bleeding their flesh as a gesture of sacrifice to get visions (done in conjunction with solitude and fasting—one source speculated that blood loss would bring on fainting and hallucinations).

Crows and their neighbors did have myriad rituals for adopting tribesmen into their war clubs and/or religious societies; sometimes this involved handing down of sacred objects, e.g. medicine pouches and their inherent powers, which might include bones of animals or relatives. (I found one anthropologist's report that claimed some especially powerful medicine bags might contain the skulls of ancestors, which were used for divination and advice.) The Crow also learnt and modified rituals from other tribes, particularly the Hidatsa, with whom they were closely related and often intermingled. These rituals seem to have been largely abandoned around the start of the 20th century, when Christianity was widely adopted by or forced on the tribes.

However, for all the modern talk about maintaining traditions, the inconvenient truth is pre-twentieth century Native American religion was highly personal and fluid, so there’s almost no such thing as “authentic” rituals, any more than there is an "authentic" version of the Bible, or "authentic" martial arts forms. (See what I did there? Pissed off everybody in one fell sentence.)


As far as I can tell, the romantic pre-urban myth about Indian blood-brothers comes from a series of books about the American West by popular German novelist Karl May, which were published in the 1870-80s and featured an Apache "chief" named Winnetou. Karl May probably never visited North America and he certainly wasn't acquainted with any Apaches.

So where did May get the idea?

Turns out I'm not the only one who had that question.

I found a thesis paper by a medieval historian who was looking into this very phenomenon. In every case where a ‘blood brothers’ ritual is mentioned—and there are many in medieval manuscripts—it seems to be used as a sort of backhanded compliment or self-aggrandizement i.e.: "Those savages over there were REAL badasses, but we wiped ‘em out anyway, because ours is the true civilization.”

The author of the paper concluded that NO ONE actually did this ritual except possibly the ancient Scythians, although in that case too, it seems that a Greek poet described the practice some 200 years after the fact, and again, may have made it up to illustrate what fierce, savage warriors the Scythians were.

The point is, the idea seems to have been well-worn even by the nineteenth century, and it seems to be ascribed to the romantic “other” more often than not, in a "Those guys are crazy!" kind of way.

With that in mind, I tweaked the scene in such a way as to pay homage to the trope while hopefully injecting a nod toward factualism.

And for the record, I think my husband put it best when he said, "Why are tough guys in movies always cutting up their hands? That's the dumbest thing ever. A cut on the hand takes forever to heal because you're always bending your hand and breaking it open and then it gets infected."

Interesting side note #1: I consulted a college anthropology professor who *did* claim to be an expert in NA matters, and while he did take issue with several points in my manuscript, he didn't bat an eye at the blood-brothers ritual, which made me inclined to distrust everything else he said.

Interesting side note #2: Deb Reece at American Indians in Children's Literature touches on the subject here, though does not offer any counter-examples or resources to refute the claim (though I admit it's pretty difficult to prove that somebody DIDN'T do something—it's the bane of historical research).

Interesting side note #3: I found a piece asserting that Chinese gang members and underworld types (again, fierce warriors of the foreign persuasion)  did this sort of thing in the late 19th century up through the 1940’s. My Chinese Kung fu teacher, who is a Hong Kong native, also insists it is so, but did not provide references.