When I was fourteen or fifteen, a freshman in high school, there was a girl in my English class named Elisha. Pretty, in that easily-bruised way girls have when they grow up too fast. She wore a lot of black--acid washed jeans, suede fringe jacket, slouch ankle boots, oversized hobo bag of the type that is in style again. Lots of fake, flashy silver conchos. Feathered, frosted ash-blonde hair. For some reason I can see her face plain as day, when I've forgotten a lot of other people from that time. She and I were not close, but we got along well enough. We were on different tracks in life. I was a goody-two-shoes, headed for a Baptist college. She was a model, the rumor was. Maybe a groupie. I don't know. She started skipping class around the time that I'm thinking of. Being a goody-two-shoes, I was assigned to take roll for the class. She was gone a lot.

She died not long after that. At fifteen. Drug overdose, was the rumor. At a party, took too much. Stomach pumped. Too late.

Kids have an alarming tendency to kill themselves at that age, before they learn the limits of their own bodies.

I don't know why I think of her sometimes. We weren't really friends. I guess her death was the first proof I had that kids really did die--kids in my world, not just in movies or pop songs or public service announcements.

Twenty years ago. When I was fifteen I kind of unconsciously expected that time would just stop at 1992--the year I graduated high school. It didn't, of course. I'm still here.

Elisha is gone--or mostly. I find myself wondering how airtight modern caskets are; what kind of shape a body would be in after twenty years. For some reason the thought of her sweet, melancholy face rotting away in the ground makes me sad for her lost time. I think of what *she* might've done with twenty more years. I probably would have never seen her again after graduation, but still--it's as if one person being robbed of time leaves less for the rest of the world. I don't even know if that makes sense. I'm just sitting here writing ghost stories and having morbid thoughts about a dead girl I barely knew.
Posted by Holly at 9:35 PM 2 comments:

Sewn by me, for Melissa at Evil Pawn Jewelry: 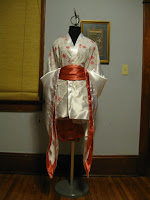 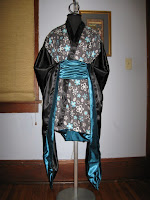 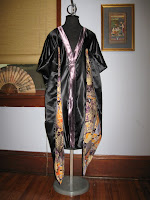 Am highly curious to see the photo shoot for this one!
Posted by Holly at 7:19 PM No comments: