I've had two inquiries in the last 24 hours from customers wanting a custom-made replica of the Catwoman costume worn by Anne Hathaway in The Dark Knight Rises, so I guess it's time for this post!

The design is fairly simple--a bodysuit with thigh-high boots and opera gloves, low-slung belt. I could knock off a quick and dirty duplicate in a week or so, and I probably will. Materials would cost me about $200, and labor is another $300 or so. Throw in boots, goggles, and belt parts, and I could make you a recognizable duplicate of the costume for about $600.

But then people start asking for a "movie accurate" costume, and the details get complicated in a hurry.

According to an interview with the costume designer, the bodysuit is actually two pieces, joined by a low-slung belt. The original fabric is "polyurethane coated Spandex with an embossed hexagonal pattern."

Here's a good close-up of the textured fabric: 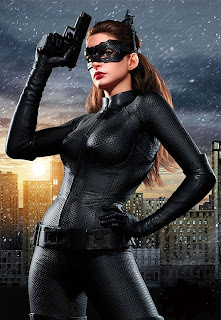 Now kittens, I have seen similar textured fabrics on athletic wear, but I have yet to find anyone who sells it retail, and I've been searching for about a year. There is undoubtedly a factory in China that could make it for me, but a minimum order of the stuff would be about 500 yards, and probably a few thousand dollars. A one-woman independent contractor like myself has relatively limited resources.

Similarly, Selina's mask appears to be made out of cast rubber or heavy latex. I know there are some costume-makers out there who do casting, but I'm not one of them, and I don't have time or inclination to learn. Likewise with the goggles, which are probably injection-molded plastic.

I can *approximate* the look of the mask and goggles with other materials, at least to the point where they will look good in photos or at an appropriate comfort-zone of observation on the Con floor. But they won't have that plastic sheen and the functionality may not be exact. For instance, her goggles appear to be hinged just above the ears, and so far I haven't figured out a way to do that.

Of course, the level of exactitude you get depends partly upon how much you want to spend. The more time I spend on something, the more exactly I can reproduce it. This may mean several drafts of patterns and a lot of wasted materials. These things can double your costs.

To make the absolute-best replica of this costume that I could personally do, with my available materials and skillsets, would cost around $1200, and take a few months to assemble. For that reason, I probably will not be doing any "movie accurate" replicas of this costume for the 2012 Halloween season.

However, if you are interested in having a costume made for the the long-term and are willing to invest the time and money, please do contact me. My email is on the right sidebar.

no substitute for experience

I met with a new client on Friday, a woman with professional dance experience and a bit of sewing experience, as well. She did a lot of gushing over my work, remarked on the clean finishing inside and out, and claimed that I was "professional New York costumer's level." She asked where I had studied.

"I'm self-taught," I said. She didn't believe it. She thought I'd gone to KU's textile design school. "I know people who graduated from fashion design school who can't do this," she said, and I wholeheartedly believe her. I can pick up a debut novel and tell by the first chapter if it was written by an MFA graduate.

Frankly, I find it disturbing that the first question someone would ask an artist is, "Where did you study?" And I'm not singling out my client, because her innocent inquiry didn't bother me, but I see it on DeviantArt all the time. This morning I was looking at Merimask's latest creation and it's the first question anyone asked in the comments.

Don't get me wrong. I'm not knocking education. But I don't think it's as significant to the artist's development as people want to think it is. I have always held that creative writing classes and how-to-write books are bad for beginning writers. My Sifu likes to say that the student's skill is not necessarily a reflection of the teacher. Mikhail Baryshnikov reportedly said in an interview that his teacher was "nothing special," but what he imported to Misha was the value of hard work.

I'm inclined to think that this populist fascination with degrees and certification is the trickle-down effect of corporate culture, where Human Resources only has time to examine the quantifiable, and success is only measured by the bottom line of the current quarter. In that environment, where you went to school is more important than what you did while there.

And of course in the creative fields, that where-did-you-study question is sometimes the only tangible there is. But I think there's another reason why casual admirers would ask it, and that's envy.

On DeviantArt, every half-decent artist is bombarded with four predictable questions, "Where'd you learn to do that?" "How long did it take you?" "What tools did you use?" "Can you tell me how to do it?"

The answer to all four is comprehensive: "Pick up a tool, any tool of your choice that's appropriate to your medium, and do it yourself, for as long as it takes, until you get it right."

But nobody wants to hear that because it bursts the bubble. Everybody knows, deep down, that to get good at something you have to work at it, a lot, for a long time. But everybody hopes, semi-consciously, that they'll stumble upon the right word or trick or secret that will make everything fall into place. That can happen, but it's usually only after putting in years and years of work. And in my own experience, even some very good teaching can take a year or more to sink in, because it takes time and context to understand, to overcome the ego, to allow the truth to compost and seep through your own worldview until it's something you can use.

Last March I read "Blink" by Malcolm Gladwell, which is about intuitive decision-making. On the surface, it seems to be about trusting the gut and making a decision in the first second or two, but that's a superficial reading that completely misses the point.

Through chapter after chapter, Gladwell trots out experts: military tacticians, art critics, professional food tasters, music producers, and marriage counsellors. He dissects all of their decision-making processes, and how those processes differ from the average untrained person's. His conclusion?
The seasoned pro's 'gut reaction' is actually the cool clear voice of mastery.

You don't get mastery from four years of college. You might, if you're lucky enough to have good teachers and an attentive attitude, get the tools necessary to pursue mastery on your own. But asking "where did you study?" is a bit of an insult, when you think about it, because it's the artist's drive and hard work that make the education useful.

Tomorrow, I'll talk about why there's no substitute for education.
Posted by Holly at 10:26 AM 1 comment:

So I had a talk with a potential editor today. Nice chat. Professional, insightful, clinical.

And now I'm freaking out. And I'm going to be freaking out for probably the next three days, because that's how long it takes these things to burn out of my system.

Just so you know... I'm at the stage where my agent is shopping around my novel. The manuscript is at a stage that we will tongue-in-cheek refer to as "finished." There are many stages of "finished" in the life of a book.

For instance, last fall I thought it was "finished" enough to send to agents. My agent read it, liked it, and thought it needed to be more "finished" before it could be sent to editors. I agreed, and in March we arrived at a new stage of "finished" which is now being circulated through New York. Now there's an acquiring editor who likes the book, but thinks it needs to be more "finished" to make it publishable. Assuming, of course, I can make changes to her satisfaction, she will then buy the "finished" manuscript and run it though the gauntlet of editors, copyeditors, and proofreaders who will eventually produce something "finished" enough to go to press.

Actually, writing all that out calms me somewhat. So did talking to my sister, who reminded me that this is how the biz works, that any editor I go with is going to want changes and I would be expected to make them if I wanted to sell the book.

And I let me be clear, here: I don't think the editor is necessarily wrong with the changes she wanted. In fact I think there was a lot of value in what she was telling me. And I know that a certain percentage of my readers are going to feel the same way. So how do I then revise to satisfy those readers without compromising the rest of the story/characters/intent? How do I know that just because this one editor thinks something needs adjustment, there isn't another editor who will think it's fine just as it is?

This is the part I hate about being a writer. The indecision, the second-guessing myself. You know what it's like? It's like being 13 years old and agonizing over "Does he like me? Was he talking about me? What did he say? What did that mean? What should I wear? Will this get his attention? Will he want to go out with me? What will we do when we go out? How do I let him know that I like him without being too trampy/slutty/pathetic/needy?" I hated that shit when I was a teenager and I hate feeling that way now.

I hate that the story has gone out to other editors and I won't have a chance to revise it again before they see it.


I hate that the last story in the novel is the weakest of the bunch and I don't know what to do about it.

And I hate the thought of rewriting on a 'maybe' because a story is like bread dough--you work it too much and it gets flat and tough.

Over dinner my husband asks what I did during the day.

"Cleaned a bit," I say cheerfully. "Did some kung fu practice. Wrote another scene."

"So the writing's still going good, then," he says.

"Oh gawd, yes," I almost moan. "It's like all the machinery is running–running smooth–spinning–" I make hand-cranking motions on either side of my head, because ironically enough, talking about writing is for me extremely geometric and tactile, rather than verbal. "Moving right along, thank god." I can't describe how fulfilling it is. "Only problem is, I got all these sewing orders pouring in, got this one I got to finish up and mail out by the end of the week."

"Not the least little bit. No."