The bruises from the Halloween wreckage are fading and I'm feeling the need to inject some theatricality into my own life.

Exhibit A:
John Steed and Emma Peel, our own Halloween tribute to The Avengers.... 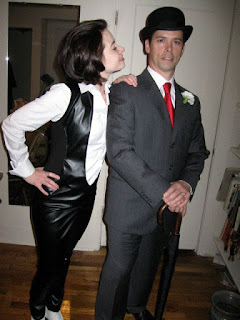 I made my jumpsuit. I must admit I kick butt when it comes to patterning these days, although that pleather was ultra-cheap and probably wouldn't survive a second wearing. But it was $10, so who cares? Oh, and those white booties? Actual vintage 60's footwear, made in France. Took me two months of hunting online to find them. 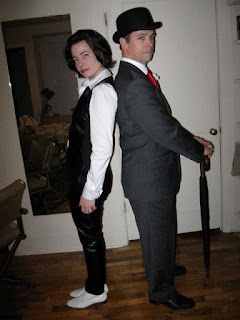 My honey looks amazing. All the women we met kept commenting how how yummy he was. All the guys who have seen this pic comment on what a shame it is that no one dresses up for day-to-day anymore...

This Just In From the 1890's, an article in the NY Times about the influx of late-Victorian influences in fashion and interior decorating. Wow--where have you guys been? You know what they say, when the mainstream takes notice, the trend is over. Nevertheless, after I read this I ran straight to my fabric stash and pulled out a couple of the wonderful woolens I've been hoarding for the past two years. I think a new skirt is in order. Sherlock Holmes is coming out in December and I want something appropriate to wear.

Exhibit C:
Emilie Autumn. I know I'm coming late to her party, but I don't think I'm exactly mainstream, and I hope this chick isn't Over--she's only, like, 30. I've been peripherally interested in Emilie for a while, but you know how sometimes you're not ready to process a sound or a flavor (like the first time I ate Indian food) because it's too unfamiliar, but the unfamiliar is also interesting, and stays with you until one day you say, "Hey, let's try that again," and it turns out to be exactly what you were in the mood for?

I'm especially digging on "Swallow." Not that it's indicative of my general mood, but I've been there. Periodically.

This song intrigues me because it seems to be talking about her bipolar disorder (I'm assuming that it's literal and not just a metaphor) and how she wishes she were a little more normal--to the point she's willing to medicate herself. Myself, I sometimes wish I were a little bit crazier, which is why I'm drawn to artists like Emilie and Amanda Palmer--and Alanis and Tori, back in college.

Sometimes I consider dying my hair pink. But never long enough to go through with it. It amuses me to let people think I'm normal.... I can observe them at closer range that way. That's why the Avengers appeal to me: Steed and Emma Peel look like a couple of posh mainstream folks, but beneath the tweed and leather they are subversives who can destroy you.
Posted by Holly at 11:18 AM 1 comment:

Excellent short story by Cat Rambo in Strange Horizons ezine: Ms. Liberty Gets a Haircut. Both celebrating and dissecting the superhero(ine) mystique, and the fanboys/girls who power it. A touch of Michael Bendis' "Powers," perhaps by accident. If this were a monthly serial, I might even buy the TPB.

It never ceases to amaze me how many pop songs come out that lyrically crucify either the music industry machine or the pop stars who power it.

The latest example I've found is OneRepublic's "All the Right Moves." I dig the video, for reasons that should be obvious to you regular visitors, but the lyrics are positively vicious.

See, the lead singer/songwriter, Ryan Tedder, has written for some of the biggest pop stars out there. In fact, earlier this year there was a flap in which Kelly Clarkson accused him of providing the same backbeat track to both her and Beyonce.

She may be right. If he did, it was unprofessional. And Clarkson has a point that the fans are going to accuse her of ripping off Beyonce. Fans are stupid that way; it doesn't dawn on most of them that the artists they love are patched-together composites: puppets assembled to represent the talents of many different people.

My sympathy is with Tedder. I'd think if you had an ounce of self-esteem, making art for other people and watching them get the credit would tend to eat at your soul. And if one of them came back and spat in your face because you didn't make her famous enough, or not famous in the way she wanted... well, let's just say I find this embittered rant of a song tremendously satisfying.
Posted by Holly at 11:22 AM 1 comment: