I hate those tomato pincushions that come from the fabric store. You know what I'm talking about, right? If you sew you probably have one, or you remember your mom or grandma having one. In fact the first one I had was handed down from my great-grandmother. I hated it, but I used it until the cotton cover started to disintegrate from sheer age.

I was very poor at the time, but one must have a pincushion, so I scraped together some change and bought a new crappy tomato at Joann's. Probably used a coupon for it, too--that's how poor I was. The crappy thing developed a hole within weeks of my buying it, but it was all I had, so I put up with it.

The last couple years I could certainly afford a new one, but I've either been reluctant to buy another crappy one, or unable to find a good one that I liked or was willing to spend money upon. There are a LOT of pincushions for sale on Etsy.com, but most of them are decorative rather than functional. The best functional one I have seen was filled with glass beads for weight, and cost $45.

That kind of inspired me to make my own. 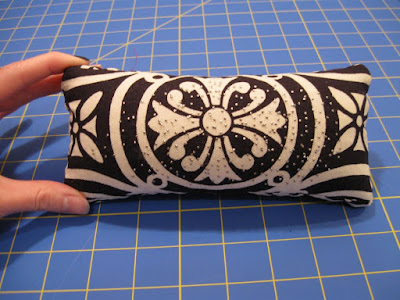 The black-and-white fabric is a rather thick, tightly-woven cotton. I bought it to make a handbag, which is not likely to happen any time soon, but anyway I had enough to sliver 4 inches off the end for a pincushion. 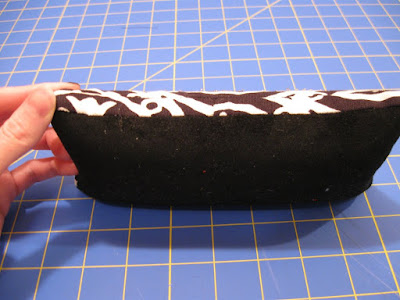 The back is a scrap of fine black suede I've been hoarding for years.

This sucker is about the size of three crappy tomatoes, about 4x8 inches and a couple inches tall in the middle. It's filled with polyester stuffing beads and a bit of craft polyfill. It's heavy, and slightly grippy on the bottom so it doesn't slide around when you grab or stab at it. 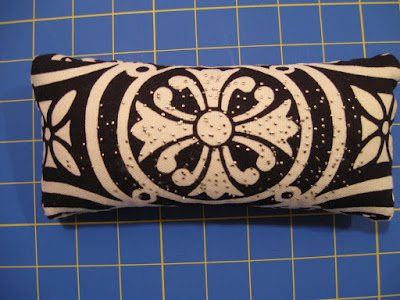 This should last me a while. The only funny thing is, my eye hasn't yet learned to identify it as "pincushion." I keep overlooking it, in search of the crappy red tomato.
Posted by Holly at 1:13 PM 4 comments:

Turns out I wasn't the only one who dug Scarlett's leather jacket in the movie. I've had a couple hits by people shopping for it. So here's what I could dig up:

Tan leather motorbike Jacket, also by Hinge: $298. Based on my fuzzy memory, this is probably the closest of those I found to what Rachel Nichols wore in the movie.

I'm feeling rather smug, because I already have a tan jacket very much along these lines, which the SP bought me at Gap about two years ago. I think we paid $80 for it on clearance. But then I've often been ahead of the curve.

What if you'd rather dress as a bad girl? Depends on how bad you wanna be (and I'd rather not know, thanks):

Bespoke leather jumpsuit suitable for a Baroness: about $1600 U.S. Which is plumb reasonable for custom-fit leather, if you ask me.

Someday when I'm bored and rich enough I may make myself a leather jumpsuit (or more likely, a two-piece suit, which is more comfortable) just to say I've done it. Don't know where I'd wear it, though. My international spy career has been less appealing since I married the SP.
Posted by Holly at 9:47 AM No comments:

I had no interest in seeing this movie. My husband bribed me with popcorn, an action he probably regretted, since I spent the movie spewing it at the screen.

I'll be up-front: I was a Joe fanatic in my pre-teen days. But I got off that train a long time ago, and I could tell by the trailer that the movie was a loud, frantic, emotionally immature, sloppily-scripted, overly-CGI'ed wankfest. I wasn't wrong.

The casting was fairly highbrow for a movie of this caliber, and the actors did the best they could with the material. Channing Tatum has taken critical flack for being wooden, but he didn't bother me. Damon Wayons also failed to annoy me for the first time in his career. The banter between the two of them was relaxed and natural, if not terribly original.

Arnold Vosloo, who I have only ever known as "The Mummy," was a dead-on Zartan--intense, gleeful, and slightly twitchy--and I sure wish there had been more of him on the screen. His "Mummy" costar, Brendan Fraser, gave me the biggest (and only) fangirl thrill of the movie when he appeared in an uncredited cameo as Flint (on IMDB.com the character is called "Sergeant Stone" but I know better). And Sienna Miller was a perfect Baronness, insomuch as the writers allowed her to resemble the Baronness of old.

Dennis Quaid, on the other hand, was just BAD. I had expected him to be a worthy General Hawk. But he approached the role as if doing a mid-afternoon stage performance for a group of kindergarteners--blustering, growling and over-the-top. Every word that came out his mouth made me wince.

The costumes were a real mixed bag in this movie. On a set where everything is over-the-top, the costumers were under real pressure to make the characters stand out visually. And they succeeded, but not always in a good way.

Scarlett: Hair too red. Makeup too bright. Curls too tumbling and artful. Where did she find time to apply the curling iron? No woman with long hair knowingly goes into battle without some ponytail holders. And what was with the molded breasts and thong on her black body armor? Weren't these people present for Batman Forever a/k/a Nipplegate?

Snake Eyes: Ridiculous molded lips on his mask. Visor protruding from his face like the prow of a battleship. Appalling polysterene body armor with fake muscles which I'm quite sure are not as impressive as Ray Park's own physique. Hey guys--let's take one of the most physically impressive guys in Hollywood and swaddle him in black rubber. Awesome.

The Doctor/Rex/Cobra Commander: Joseph Gordon-Levitt spends the whole movie buried under latex scarring, breathing mask and plastic neck-corset. To compensate for the loss of any means of physical expression, he gasps and groans and chuckles menacingly. Gordon-Levitt is supposed to be this renouned actor, but I kept thinking that David Bowie wouldn't have needed all the aparatus to pull off a crippled madman--nor would he have allowed it to get in his way.

Storm Shadow: Rendering his white ninja suit in leather was a bad idea. It was bulky and weird. The coattails were stupid--remember Edna Mode's diatribe against capes? Plus he looked kind of like an Imperial Storm Trooper on Hoth.

The BARONESS. A fairy-gothmother collection of decadent leather catsuits with assorted details and texturing. I particularly liked the one with the black crocodile V-inset at the bust and the low-slung leather belt. Her constant costume changes made sense for the character--she was essentially a Bond villianess--wealthy, plush, and hedonistic. The only time she failed to look stunning was in the hospital scrubs at the very end. Sienna Miller should seriously consider keeping her hair black.

Destro/McCullen: Impeccably tailored wool/silk suits. Pinstripes. Silk ties. Slurp. His acting wasn't bad, either. I could've been quite happy with him remaining as the lead bad guy and Cobra Commander blowing himself up.

Scarlett's civilian garb whilst in Paris: Perfect. Can we have more of this, please? Rachel Nichols is a gorgeous woman and probably not a bad actor. When she was in a sleek tan leather jacket and jeans she looked fabulous. There was no reason to tart her up.
Posted by Holly at 10:01 AM No comments: