I don't do Resolutions, but last year I set myself three goals: to finish The Curse of Jacob Tracy, to find a literary agent, and to leave my day job. I'm a bit gobsmacked to realize that all three of those came to pass.

Long-time readers will remember that waaaay back when I was still writing as if I enjoyed it, a nice lady named Raechel Henderson offered to publish End of the Line as an ebook. Despite our best intensions, that was not to be; Eggplant Literary Productions went on hiatus for a few years.

Now it's starting up again. Eggplant's startup page is here (God love Wordpress!) and their guidelines page is here. They are looking for novella-length ebooks, and short-shorts for a literary magazine. The focus for both lines is fantasy/science fiction.

I always respected Raechel's professionalism and taste as an editor. (Easy to do when somebody wants to publish your stuff, eh?) So if you got a story that's a wee bit too long for any of the other markets, and aren't up to self-publishing your e-book, pass it by Eggplant.
Posted by Holly at 10:29 AM 1 comment:

Five years married and we just bought our first Christmas tree together. In past years I used a little miniature three-tree grove which I believe came from my parents' old business office. Last year we didn't even decorate. I think we were too tired and cranky, probably too reluctant to spend money. Somewhere along the way I'd bought some lights and plain glass ornaments that were never opened, but other than that and a half-decorated wreath, we had nothing. It's a measure of how hard and fast I fled from my old life, that I didn't even take any ornaments of my own, either from my parents' house or from my ex-husband.

We bought a Black Hills Spruce from the Optimists in the grocery store parking lot. It's been too warm this week for the trees to be properly chilled, so they're looking a bit desiccated. We borrowed a few boxes of crap from his mom's basement (she had 60-odd years' worth collected, including some scary looking string lights), put a bunch of tacky tinsel garland on the boughs, and the Sparring partner hung old satin-thread ornaments and faded wooden toys all over, while I worked on finishing the wreath. I put on gold cord and red braid, and black-gold net. Then I added a gold bow, blue oversized jingle bells, and a few miniature toy ornaments in red and white.

"That looks like Christmas exploded," the SP remarked when we were done. And it does. No Nieman-Marcus designer-themed tree for us. But then again, we aren't people who live in a decorator-showplace house, with three-color schemes and accent pillows. All our stuff is patchwork--furniture, curtains, artwork--things we've found, liked, collected. And really I suspect most people's Christmas decorations collections are the same way--things that were given to them by, or chosen for, someone they loved. The mangled pipe-cleaner ornament made by a child. The falling-apart foil angel that belonged to someone's great-grandmother.

As we were sorting through boxes of musty tissue paper and limp tinsel, we remarked on what we'd keep and what we'd return to the basement, what we'd quietly get rid of and what we might acquire in future to accent the good stuff.

It's fashionable these days to disparage Christianity. It's fashionable to talk about the pagan influences of Christmas trappings, as if those factoids are supposed to make hypocrites of those who still celebrate Christmas as a religious holiday. Since my divorce I've been conflicted about Christmas. I lost the will or the desire to worship or pursue God; I am firmly in the agnostic camp--not so much "I don't know" as "wait and see." But since I was raised by Christian parents, and schooled in a liberal arts college, and hang out with a decidedly Zen crowd, and am an Existentialist by nature, I got to a point where I couldn't hardly act or believe in anything without feeling I was reacting to something else. It's hard on a writer to feel as if every available option is a cliche.

But I think we need festivity in our lives--me, especially. Holidays--holy days--were days of worship, but in the pagan and Christian faiths (pretty much any religious group that doesn't indulge in human sacrifice, really) they were also days of rest and community.

Routine and even-keel are good things. But so are renewal and celebration. There's a difference between cliche and convention; in fiction, the conventional tropes let you know whether you're reading a romance or hard sci-fi. So you might say I've decided to embrace the formulaic this year.
Posted by Holly at 4:53 PM 3 comments:

where everybody knows your name

I love my writer's group.

Met with them Saturday for our monthly enclave. We critted. We chatted. We laughed. I whined. They sympathized. It's good to go hang with like-minded people, sharing an activity you all enjoy, where they listen to what you say and act like you know what you're talking about. Even if they don't agree with you. Everybody should have a place like that.

It's also very cool when they say matter-of-factly that I need to get used to editing screenplays because my book will get made into one in the not-too-distant future... and then someone else counters with, no, they'll take my book and process it into blockbuster pulp--but at least I'll get the rights check.

And then there was the part when I mentioned I had an idea for "Steampunk Quinn" and their faces all lit up and they went "ah!" That was extremely gratifying. They never were particularly fans of Quinn Taylor, in the old manuscripts, but they have more faith in me now. In some ways, I think what crippled the Quinn Taylor stories was my tendency toward Victorian restraint and archaic morality--things I no longer suffer from, so the anachronistic transfer is going to be interesting.

I took my own advice this weekend and printed out a fresh new hardcopy of Trace. Everybody took a section and skimmed as fast as they could, reading the bits where I had flagged the updated Boz sequences. The consensus was that I had done good things updating the emotional arcs. And now that I have a hard copy I'm better able to sit down and SEE the damn thing, as a whole. I just can't read on the screen the way I used to.

I have bits of Horseflesh yet to finish. I am resolved. I shall continue to work every day, away from my sewing room whenever possible, away from the house if I can manage it. I will jot down notes, outlines, and scenes longhand before I go to bed at night, so I have something to work on the next morning. I will stop second-guessing myself. I will accept that even when the words don't flow like wine, even when the muse isn't singing in my ear, what comes out on the page is generally pretty readable. I will put down words even when I don't feel like it. I will finish this thing.
Posted by Holly at 8:06 PM No comments:

I love this. Black and red, how can you go wrong? This is Kristin in the Batwoman costume I made for her. She was really open to using the matte black PVC, which I love. 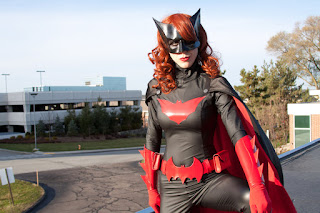 The cape is two layers of lightweight synthetic fabric. The bodysuit is black matte stretch PVC, with red PVC accents. The gloves are matte red spandex and the accessories are sculpted leather. You can order custom items like this one through my Etsy shop.

Kristin is a repeat customer of mine. She's a careful and dedicated cosplayer, she really puts thought and time into the characters she wants to portray. She's also an artist and cartoonist. You can see her work on her DeviantArt page.
Posted by Holly at 11:05 AM 3 comments: