omg, I've written a gothic with a male ingenue

Bumbling around links this morning and started reading about Joanna Russ' article about Modern Gothics, which does not appear to be available on the web in its entirety, but there are enough good blog posts about it to get the general idea, particularly this one here.

I actually have a whole library of 'modern gothics' from the very era she is describing, c. 1970, written by Barbara Michaels, who actually transcended the subgenre in many ways. Michaels has a feminist streak (her other nom de plume is Elizabeth Peters and her best-known books are the Amelia Peabody mysteries). Although she wrote a few 'typical' gothics with a bewildered, helpless protagonist, more often she tweaked the formula to feature heroines who were well-rounded, proactive and capable of standing up for themselves. Sometimes they were even male.

So I'm reading along happily and come across this quote from Russ:

The Modern Gothic is episodic; the heroine does nothing except worry; any necessary detective work is done by other persons, often the Super- Male. Whenever the Heroine acts [...] she bungles things badly. There is a period of terror, repeated sinister incidents, ominous dialogue spoken by various characters, and then the sudden revelation of who's who and what's what.[...]Most striking about these novels is the combination of intrigue, crime and danger with the Heroine's complete passivity. Unconscious foci of intrigue, passion, and crime, these young women (none of whom are over thirty) wander through all sorts of threatening forces of which they are intuitively, but never intellectually, aware.


Aha! So that's what was bugging me about early versions of Curious Weather! I was writing a gothic with Trace in the ingenue's role! I kind of knew it ("intuitively," you might say), but it helps to have it defined so clearly because now I know what symptoms to watch for. The passiveness, the fascinating/threatening mentor, the undercurrent of sexuality...

There's even the trope of "Girl meets House" in Curious Weather--Trace is constantly aware of being out of his element, in a house more luxurious than he is used to, and a house that happens to be packed to the rafters full of spirits and sinister entities, at that.

Honestly, I'm a little bewildered how I internalized by all these classic gothic elements. They must be awfully deeply ingrained in the genre consciousness, because never read Rebecca, or Jane Eyre, or any of the classics. So how did I come by this cache of clichés?

Having realized the formula, however, I'm somewhat reassured by it. It gives me a framework I can understand and subvert when necessary. For one thing, in this rewrite there are two ingenues--Trace, and Miss Fairweather herself, as shown through the flashbacks of her diaries. Trace is actually more passive than Miss Fairweather, at least in the beginning, but it is a deliberate passiveness. Because he is the stronger, more patient of the two, he can afford to watch and wait.

Miss Fairweather plays the heroine in her flashbacks--although in her naiveté she sees her niece as the innocent one--and in classic gothic fashion she finds herself choosing between two attentive and attractive men. Of course, she chooses the wrong one. In the present-day storyline, Trace becomes the embodiment of her Super-Male, and she resents him for it. She has the knowledge and ambition to save herself, but not the resources.

Neither of them is the type to watch and wait forever, though. Unfortunately, when they act in this story, they *do* bungle things. Miss Fairweather does something horrible in the flashbacks, Trace makes a big mistake in the main storyline. Of course this story is the opening act of the book, so I hope they will still learn and grow by the end of the plot arc. And of course they both are working frantically to learn as much as possible and best the other; neither is blind to the dangers the other poses and they have a known, common outside enemy to rally against.

My agent told me that Gothics were coming back into vogue in publishing circles, so I hope this one will be well-placed to ride the trend. Thank you, Barbara Michaels.

three ways to improve the internet

1. Eliminate anonymity. Make people liable for what they say and do. And don't tell me it infringes on your privacy; the marketers and the government are already tracking everything you do; don't kid yourself about that.

2. Remove "Comments" sections from news articles, particularly on the so-called "respectable" sites. Letters to the editor are a time-honored tradition, but snide remarks from every Tom, Dick and Harry with a keyboard only serve to distract. Let people employ their first-amendment rights on their own forum. Employ ruthless moderation and provide trackback links to worthy dissenting viewpoints.

3. Stop reposting other people's snotty propaganda on social networking sites. It's simplistic, it's annoying, and it helps nothing. People who agree with you will just stroke your ego. People who don't, will raise your blood pressure. Any sentiment that can be expressed in a bumper-sticker is probably over-simplified anyway.
Posted by Holly at 11:05 AM 1 comment:

This is the divine Chess Countess in my Queen of Spades corset. I can't get over how striking and fabulous she looks. Go listen to her music, the girl's got pipes! 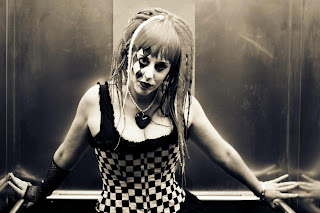 https://www.facebook.com/chesscountessmusic
Posted by Holly at 11:40 AM No comments:

He felt a shiver in the air, a tickle along the sensitive under-belly of his gift. The clock on the mantel began to chime noon, followed a beat later by the tall floor clock in the hall. Something moved in the corner of his vision, he heard a faint clank and scrape behind him, and when he turned back toward the round table, there was the silver dinner-tray, with a chill moist handprint rapidly evanescing from its lid.
He reached out quickly with his gift, but it was trickier than grabbing for an elbow and he was clumsy at it. The spirit flinched away and faded into the ether.
“Wait,” he said. “Hang on, I ain’t gonna hurt you.”
No response—but no fleeing, either. It was shy of him, but curious and eager to please. The impression he got of it was female, timid, but not the sense of chaos many lost souls had. This one had sense, and awareness.
He lifted the cover on the tray and found a nice cold-beef sandwich, coffee, creamed corn, and a rice pudding with raisins.
“I don’t suppose I could get some more of that cherry pie?” he said aloud. “That was mighty good, yesterday.”
There was a kind of shiver, and Trace heard something go chink on the table near his hand. He looked down and found a small salver, bearing a doily, a fork, and a gilt-edged china plate with a big red oozing slice of pie plunk in the middle of it. Rivulets of ice cream ran down the ruby peaks.
Apportments and telekinesis, she’d said she meant to test him on. He thought there was no harm in studying aforehand.
He broke a bit off the pie crust and popped it in his mouth. “Mmm-hmm… that sure is fine, miss. You do all this cookin yourself?”
The question seemed to amuse her. He felt a shimmer of laughter.
“No? You got help? How many servants does she have in this house?”
That subject seemed to be taboo. His skin chilled with reflected fear, and the spirit started to retreat.
“Aw, hang on there, I didn’t mean nothin by it. Wonder if you could do one last thing for me, ‘fore you go.” Trace walked to the cabinet where the cigar case lay, opened it and took one off the top. “I haven’t had one of these in months,” he explained aloud, “an’ ordinarily I wouldn’t help myself to what was layin around just because nobody was watchin.” The cigar cutter was heavy and sliced cleanly through the tapered end of the smoke. “But her worship made it clear I was to make myself at home here, and I know she didn’t stock these for her own pleasure.” Trace glanced over his shoulder, to where he sensed the spirit hovering. “Come on, honey, I bet you can light this without any trouble, can’t you?”
There was a hesitation, a drawing-together of the air. And then a shimmer, like heat-waves off the desert floor, only at eye level and directly in front of him. The shimmer tightened, brightened, and a hot blue flame, no bigger than the tip of his finger, popped into sight less than a foot in front of his nose.
It was uncanny, and Trace felt a prickle of real nervous sweat along his hairline, but he leaned forward, wrapped his lips around the cigar, and drew in a single puff of air. The cigar lit instantly, all the way around, like a magic trick. The hot smoke that filled his throat seemed to be tinged with frost needles. He pulled away from the blue flame and it vanished. He took another, longer draw, and it was all fine, rich tobacco.
Trace exhaled in satisfaction. “Good girl.”
Posted by Holly at 4:11 PM 2 comments: