ConQuest 38 in a nutshell

My Sparring Partner and I went to the local SF con over the weekend. It was pleasant. Handed off the corset to my client (looked pretty darn good), bought some books, dressed up a bit, said hi to everyone we needed to see and got a little costume love. 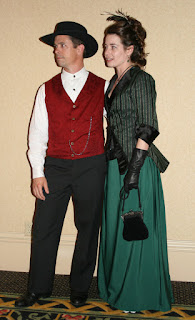 His outfit was mostly purchased, although I tailored it a bit. It's a lot easier to find off-the-rack items that will pass for men's western wear; their fashions just haven't changed that much in the last 140 years, and the fitting is less crucial. I made my dress, of course. The skirt I made years ago (it used to look like this), the corset I made last year, the jacket I made last week, finally putting to use the striped fabric I'd been hoarding for ten years. Everyone was very nicely complimentary. Jan said, "You sure class up the joint."
I think that deserves a close-up, don't you?

I did not, alas, have time to finish my hat. I'm not too broken up about it, because I liked the feathers in my hair and they were easier to wear than those little pin-on hats ever are.

We also got to wear our "Baptist" tee-shirts around the con floor. Yes, Brennan at Zazzle came through, after several harried phone calls, delays, machines breaking down, etc. Sounds like Brennan could use a vacation, too. But he got the shirts to me by noon on Friday. Since I'm not used to wearing printed tee-shirts, it always caught me off guard when someone was staring but not meeting my eyes. "They're eating my.... what?" and then I'd have to explain. Everyone was polite but I don't think many were interested in the story. Many were amused by the quote, though. "Good for them!" one guy said. "Feed 'em the Lutherans, next."

Curious thing I noticed, when other writer-acquaintances asked what I'd been doing:

Depending on who I was talking to, that flat reaction was either polite distaste for the digital market, or flat-out jealousy at the venue--or in some cases, both. I mentioned it to Rob, who concurred. "I get the same reaction when I sell to Analog," he said. "Small presses are great for what they do, but I want to play in the major leagues." Chaque a son gout, I say, without the accents because I'm too lazy to look them up.

Rob and Tracy in the onslaught of the wind tunnel a/k/a the party floor: 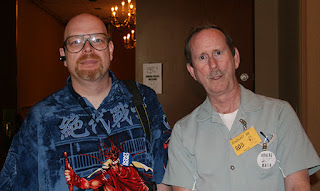 (Thanks to Shara for the pictures.)
Posted by Holly at 8:50 AM No comments:

oh, now this is cool

The preview of End of the Line is up already.

If you Google "Holly Messinger," that page comes up third, right after my homepage.

I think I'm gonna make it

I got my green striped jacket all put together this weekend. It looked really sharp until I put in the front lapel facing and ran the piping all around the edge, which created a lot of puffiness that won't quite press out. I think I may have to topstitch it. I hate to do that on a costume but there's no time to handstitch it and hey--it's a costume. Made of scraps, no less. Maybe I can try out some of the decorative stitching on my new machine. Oh, and I found some nice black frog closures that will look super down the front. I shall put those on tonight, make some cuffs, and I'm done. I may have time for that hat, after all.

The corset is done except for the top binding, which I cannot complete until the boning gets here. I'm hoping that will be today.

Zazzle is out of the tee-shirt style I wanted. Bastards. I hate it when companies put up stuff on their web sites and can't be bothered to notify the public when things are out of stock. Nevertheless I ordered a couple of other tees, one for me and one for the SP.

Oh, and the SP bought me a lovely little cotton sundress this weekend, kind of antique-bottle green with an allover eyelet stitch. I haven't worn a dress--that I wasn't getting married in--in years. Furthermore, my birthday present from Trashy Diva finally arrived--after several miscommunications and a lot of wasted postage (see above re: not advertising things you don't have in stock). It's a 40's replica, really gorgeous claret-colored silk. All of which is great, except for now I want to buy more shoes. It's tough being a gal.
Posted by Holly at 8:34 AM 1 comment:

Suddenly I've only got 9 days left until the Con! And my jacket isn't even cut out yet! And I ordered the wrong boning for the corset! And we haven't ordered our tee shirts yet! Gah!
Posted by Holly at 8:36 AM 3 comments:

in the club/update on the distractions

What I'm working on at the moment:


I'm not the only one busy. Work is picking up for the SP. He's excited about the Con, too; he bought some new accessories for his gunslinger outfit. Also, he got an order for two more of his handmade wooden tai chi practice swords. He went and bought maple yesterday. So we're in a good mood at our house. Neither of us is really happy unless we have too much to do.
Posted by Holly at 10:11 AM 3 comments:

more childhood memories, or, too preoccupied to conceive my own topic today

Remember those segments on Sesame Street when they'd visit the crayon factory or the noodle factory and show you the process step-by-step? I swear I could sit and watch hours of that sort of thing, especially if it was brightly colored (which may explain the continued existence of HGTV and its ilk).

Anyhoo, Abby's Yarns has a post-in-vein today. Check it out.
Posted by Holly at 9:44 AM No comments:

There used to be a Campbell's Chunky variety of chicken noodle that included broad noodles, mushrooms, and--according to the label--white wine. I loved that stuff when I was a kid. Apparently I had fairly sophisticated tastes as a child. I particularly liked it because it did not contain carrots. I hated cooked carrots when I was young, and although I'm more amenable toward them now, I still don't think that celery and carrots go together well, which eliminates about 99% of the chicken soup recipes out there.

Campbell's quit making that variety of its soup some time in the late 80's, and ever since I've been queen of my own kitchen I've had a half-assed ambition to reproduce that soup. Thing was, I couldn't really remember what was in it. I know there were some little brightly-colored bits in among the drab mushrooms and pale celery, but I had no idea what they were. Just not carrots.

A few weeks ago I was preparing some other dish that contained chicken, probably the jambalaya soup, which happened to have roasted red peppers in it. How wonderfully chicken and peppers go together! And celery is much more cooperative with that combination, too. Suddenly I realized what those little bright bits in the soup must've been: pimento (which is basically roasted red pepper).

Last night I was in the mood for soup, and I had most of the parts laying around, so I gave it a shot. It was not quite perfect, because I had no wine in the house and had to substitute lemon juice, and the herbs could use some tweaking. But it's a massive step forward.

In my mind this soup needs no sides, but buttered Saltine crackers are the appropriate fare for a childhood memory.
Posted by Holly at 2:56 PM 3 comments: