I'm feeling the need to tell on myself a bit here, because once again it's convention season, and every year, every con worth its salt proposes a "costuming on a budget" panel, and I'm always strung out between wanting to help and a fatalistic sense that it's a lost cause.

One CAN do great costumes cheaply. It takes patience and ingenuity and maker skills and a lot of hunting, but we have the Internet these days so it's easier than it used to be. I LOVE thrift-store costumes, partly because I love costumes that can pass as street clothes—people walking around dressed like Velma and Daphne, for instance, or Sam and Dean (hipster or Winchester?).
But it works because the costume itself IS modern streetwear. So right away the scope of such a panel is deceptively ill-defined. I don't believe one can replicate my style of costuming—that is, compile a convincing 1860's gown or bustle dress—from found clothing. The silhouette is too extreme, the underwear too essential. By the Jazz Era the corset goes away and it becomes a lot easier, and of course for men, styles haven't changed much in 180 years, give or take a few zippers.
For me, found-costuming is never going to be my jam. I'm more like a model-railroad builder. I like the designing and the workmanship and getting the details "right," although I'm not a stitch-counter by any means. Furthermore, to me costuming is as much tactile as visual; I was drawn to it because I like the sense of putting on an older style of clothing and stepping away from the 21st century for a while, as much as anyone can. And I like the way good fabrics feel. Cotton, silk, and wool are so much nicer to work with than synthetics, and are generally more comfortable to wear and last longer. I try to buy organic fibers for my everyday wardrobe, too.
But organic fabrics are expensive, and getting more so. The price of quality cotton goods has doubled in the last five years, and some types of silk have tripled. True, you can buy cheaper synthetics or cheap cottons but then you've put all this effort into a garment that is going to fade, bag, and pill after a single wearing. In my lifetime, in America, I've seen sewing go from a skill that could stretch the family budget to a rich woman's hobby. When I sew, I'm practicing skills that have traditionally been drudge work for women, and at the same time, indulging in a mode of dressing with a quality of materials that a skilled laborer would not have been able to afford in the 19th century—hell, a lot of people can't afford them now. And then you start getting into the issues of sweat shops and arable land and water consumption for cotton farming and waste chemicals for polyester production and animal rights for wool production and all those poor workers have to eat somehow and it just all becomes one impossible Existential black hole.
But I digress.
In preparation for this post—at least the post I thought I was going to write—I started calculating the cost of my latest "quick and cheap" Victorian striped polonaise. I knew it wasn't "cheap," but the actual hard numbers made me wince. So I share them now in the spirit of disclosure. 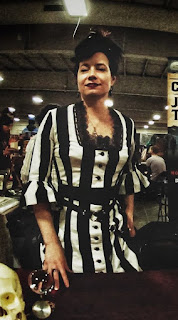 The polonaise (overdress) alone cost a little less than $200 in new (purchased in Feb/March 2018) materials.
And of course I wore it with stuff I already had:
Throw in makeup, hair pins, stockings, the old costume necklace I acquired in high school, and you're closing in on $800 for that outfit. And we haven't even talked about the three sewing machines, the iron and ironing board, the file cabinet full of patterns, the reference books, the cutting mat, the roll of patterning paper, etc., etc.,

Those are costs spread over months, years, decades. Back when I made my very first corset in 2002, I saw that the cost would be considerable and I wanted my pieces to last for many seasons. So I always get a bit flummoxed when people ask me, "How long did it take you to make that?" because they're not asking the right question.

"Thirty-some years of practice at sewing and patterning, twenty of hoarding fabric and learning where to find the good stuff, the last ten collecting passable shoes and accessories—I also collect old medical equipment, which is equally useless, but doesn't it look cute in my booth? No it's not for sale—and let's not ignore that those skills, that time to practice, the expendable income to buy the good fabrics, are the product of still more decades of luck and privilege, being a white American with a college education which she probably could have paid off by now if she'd quit spending money making damn costumes."

So. This is why I hesitate to do a "how to costume on a budget" panel. Because it's all too dishonest and depressing. But hey, I'd look pretty doing it.

Here's an even better post on the same subject, via The Pragmatic Costumer.

Also, the perennial first and last word on the subject: Cheap, Quick, or Accurate, via The Costumer's Guide.